As a young teenager, Tegra Turner Cannon of Calhoun City, used to pretend to be a cooking show host, and her sister, Tympel, caught her once during the “taping” of one of her shows.

Even though she didn’t grow up to have her own cooking show, she watches Food Network and says it’s “always a good place to start.” Tegra shows a lot of excitement over cooking, and says her family members have always enjoyed time in the kitchen together. She recalls her first cooking experience as making teacakes from the 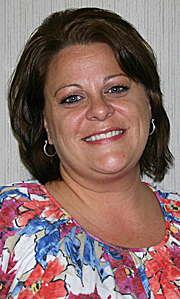 Sesame Street ABC?book with her sister and brother, Tyrone, and their mother, Patricia.

There are “tons of cooks in the family”—Mamaw Mary Alice Turner, who would have a full Sunday dinner prepared, and Mamaw Thelma Ruth, who would cook the basics for a meal except for dessert– “she always had desserts–cake, peanut brittle.” Tegra’s parents, Patricia, and the late Joe were also good cooks. Tegra’s favorite meal that her mom used to make was Cheeseburger Hamburger Helper, and slaw.

“Food Network was new,” said Tegra, and she remember her daddy watching Emeril, and making etoufee. Tympel is the only one who can make Joe’s “T-Bo” potatoes, a stewed potato dish, that Tegra calls a “Joe Turner original.” Their brother, Tyrone, adds cayenne pepper to everything, and even though he is a good cook he can’t give you a recipe because he never makes anything the same way twice.

“Nobody can do Patricia’s butter roll. She was famous for that butter roll,” said Tegra. “We have the recipe, but can’t do it,” and she has given up. Her mother also used to make a macaroon cake with a creamy center filling from a Duncan Hines mix that you can’t get anymore. Tegra tried one this year that turned out to be a “big hit” for the birthdays of Tympel and Tyrone. For family birthdays, they have a party at BCLC with their mother and usually bring fun foods–dip, appetizers–also something she likes to make.

Tegra uses the internet a lot, but is a “fool over a cookbook” and has tons of them–a whole closet with shelves full of cookbooks. She likes to cook new things, especially main dishes, and likes to have company for supper. She and her co-workers sometimes make potluck or pasta lunches at work.  Loaded baked potatoes are a necessity at Christmas, along with deer wraps. They tenderize and marinate the deer meat in Dale’s, wrap it with bacon and grill it, then add cream cheese and jalapeno pepper to the wraps.

Husband, Barry, cooks the shrimp and grits. She says she is lucky to be married to somebody who likes to cook, and he says he married her for her cornbread. She uses her Mamaw Ruth’s recipe, and likes to have that cornbread with Rotel Cabbage (a recipe idea from Taylor Grocery) and maybe a grilled pork chop for a meal.

She’s been making the creamy chicken skillet dinner for years and when she first got the recipe she didn’t think it would be good, but says it’s become one of their favorites. Barry learned to cook from his mother, Brenda, who makes the “best fried chicken ever,” and his dad, the late Charles Dewey Cannon. Barry is their biscuit maker and on occasion makes a breakfast spread for supper including tomato gravy.