Stephanie Lucius of Calhoun City says her favorite time to cook is for the holidays, but she and a big group of Calhoun and former Calhoun countians also enjoy cooking for lots of Mississippi State tailgating.

A couple of her favorite tailgating dishes are burger sliders and jalapeno popper dip (to which she always adds bacon.) For an early game, she likes sausage and mushroom quiche  and sausage balls. 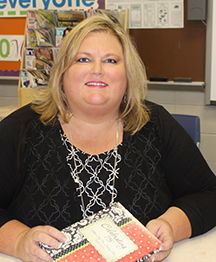 The group has their own website, Mstatetailgate.com, which was set up by Polly Davis of Sabougla. They all bring food each week and post ahead of time on the site what they are bringing so everyone can view the menu. They plan to eventually add their favorite tailgating recipes to the site, which also now features game day pictures.

An easy tailgating recipe she shared is mixing a pound of browned and drained sausage with shredded cheese and a bottle of ranch dressing, then put a spoonful of the mixture in each crescent roll triangle, roll up, and bake until brown.
Stephanie has 24 first cousins, so they “have big holiday gatherings” at her late grandparents’ house, Alto and Spencer Lucius, in Derma. The Lucius family is so big, and Stephanie commented that her grandmother had many “good taste tasters” to cook for, and they loved her ham pie.
Favorites the family expects Stephanie to bring to the Lucius and Lee Christmas and Thanksgiving meals are Rotel Potatoes, which her mother Shirley Lucius started, and also squash casserole.

Stephanie says Pina Colada Cake is a good dessert for the summertime and is one shared by her grandmother Tina May Lee. She likes to serve the cake when it’s her turn to host a New Century Club meeting. They usually have cake, nuts and something like cheese straws, or dips for their meetings. She has also made Neiman Marcus brownies and stuffed strawberries for ones in the past.

The club did a cookbook several years ago for Calhoun City’s Centennial Celebration and a second one last year for their 75th anniversary.
Stephanie’s aunt Rachel Lucius “used to make chocolate gravy for us all the time,” and Stephanie makes it, but lets someone else make the biscuits. Her favorite thing is to grill–chicken, fish, steak and veggies. She loves Pinterest for getting new recipes, saying she doesn’t always follow a recipe, and sometimes substitutes a lot.

At Calhoun City High School, the staff has a potluck meal at the end of the school year and at Christmas. For those meals she sometimes brings homemade macaroni and cheese or rice casserole, and says Coach Mike Ray usually grills tenderloin. This year she’s planning on buffalo chicken dip or jalapeno popper dip.

Ham Pie
(Alto Lucius)
1 1/2-2 cups leftover ham, cubed
1 cup carrots, sliced
2 cups self-rising flour
1/2 tsp. salt
1 can sweet peas, drained
Salt and pepper
4-5 eggs, boiled and diced
Milk
Crisco shortening
In large pan, boil ham and carrots approximately 30-45 minutes, or until carrots are tender.?Reduce heat to medium high. (I?usually make sure I have 1/2 pan of water left once carrots are done.?Depending on how “soupy” you want the dish to be, you can have more or less.) In mixing bowl, stir together 2 cups self-rising flour, 1/2 tsp. salt and about 3-4 Tbsp. Crisco until blended. Add 3/4 cup milk and stir until doughy. Drop mixture into water a small spoonful at a time to make dumplings. Add peas and diced eggs. Add milk as desired to turn  broth white. Salt and pepper to taste. Cook additional five minutes until dumplings are done.