Rebecca Grier of Calhoun City continues to make the Butterscotch Chewy recipe she got from her mom that came from a 1956 Pillsbury Bake-off book. She learned to cook from her mother and grandmother, but says when she really started cooking by herself was while in home-ec class. There she learned to make a chocolate sheet cake that she still makes.

She does most of her cooking when her kids are home. They were raised on vegetables,“country cooking,” and that’s what they all like.
“It’s not a meal without butterbeans,” one of them said. They also like peas, cabbage, cornbread and tea. To season peas or butterbeans, her grandmother would always take a butter knife and dip it down in the molasses bucket, then into her vegetables, and her mother simply added a half saccharin tablet, which is what Rebecca does. 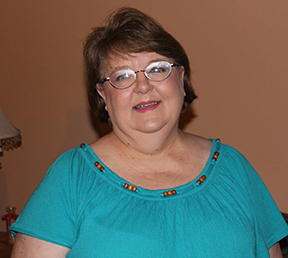 She usually also cooks carrots, and another thing she has started making is sliced potatoes rolled in dry onion soup mix, adding bacon, cover with cheese and bake (or grill). They camp a good bit and the kids like grilled chicken.

They are not really sweet eaters, but Rebecca sometimes makes cobblers–fruit or chocolate. She also likes to make peach or apple rolled up in crescent rolls, with Sprite poured over, or a bread pudding.
They have the Coca-Cola salad every Christmas, along with favorite salads of other family members–pistachio and lime. Her mother, who is 92, still does a lot of holiday cooking, she said.

Stuffed tomatoes, along with many other recipes she has, are something Rebecca grew up on, and the ham pie is a real old recipe her mother used to make–“comfort food in the winter… like chicken and dumplings,” she said.

One of Rebecca’s favorites is a tomato sandwich: Wonder bread, Miracle Whip and tomatoes. She also likes fish–grilled, baked or fried. Her favorite dish that the Lewis Memorial United Methodist Women make is the baked chicken rolled in bread crumbs.

Rebecca made a cookbook for her daughters-in-law for Christmas 2004 which contained mainly family recipes– “country things–things we were raised on. There’s no way to explain what you’ve lost if you don’t write it down!” she said.

Butterscotch Chewy
4 medium eggs
2 cups firmly packed brown sugar
1 Tbsp. butter
1 1/2 cups all-purpose flour, sifted
1 1/2 tsp. baking powder
1 1/2 cups pecans or nuts, chopped
1 tsp. vanilla
Confectioners’ sugar (optional)
Using double boiler, fill bottom part with water and put on stove to get hot. Meanwhile, beat eggs with rotary beater in top of a cold double boiler until blended. Add brown sugar and butter. Place over rapidly boiling water, stirring constantly until hot (about 5 minutes). Remove from heat. Sift together flour and baking power and add all at once to cooked mixture; mix until well blended. Stir in nuts and vanilla. Turn into well-greased and lightly floured 9×13 pan. Bake at 350° 25-30 minutes or until it springs back when touched lightly in center with fingertips. Serve with ice cream, whipped cream or sprinkle with sifted confectioners’ sugar. (I use a 1” deep cookie sheet.)

Stuffed Tomatoes
7 or 8 tomatoes, may have to add some juice
1 small onion, chopped
4 cups cooked ham, finely ground
Bread crumbs (cornbread or biscuits will do)
Salt and pepper to taste
Cut top off each tomato and scrape out insides. Chop thick pieces from inside. Cook onion and tomato pieces until tender in skillet. Add ham, salt, pepper. Mix well. Add bread crumbs. Mix well and simmer 15-20 minutes. Stuff warm mixture inside tomatoes. (Juice from tomatoes can be used if too dry).