Phyllis Camp of Banner does her cooking on a General Electric stove bought in July of 1950 from Pryor in Calhoun City. She has been using it since 1986, when her mother-in-law, Hazel Camp, died. Her husband, Donald, said they still have the owner’s manual and that it cost $369 new.

She also said that she always uses a pressure cooker like her mother, the late Odell Ledbetter.
Pink Lady Cake is one thing she uses that oven for a lot. It is a favorite of  her son, Keith, and his daughters, Kasey and Kamry. 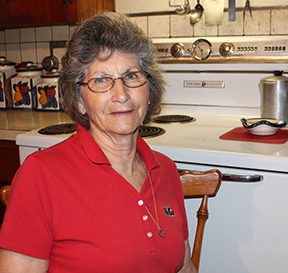 She likes to make it for family gatherings, especially in the summertime. Daughter-in-law Tonya also said it was her favorite, along with squash dressing and pecan pie. Mrs. Phyllis has had the recipe for years, saying she got it from a floor lady at a plant in Water Valley.

She has a Bell’s and Banner Church cookbook she likes to use, but her favorite is one she got when she and Donald married 53 years ago that has long been without a cover. As far as recipes, she has “enough stuff cut out to last forever,” and her sister, Raye Brooks, often brings her new recipes to try.

The oldest in the family, she always cooked lunch before going to the field. For their afternoon snack, her mother would go to the house and come back with a big pot of milk and cornbread, so she learned early to make cornbread.
They grew up on peas and butterbeans from their garden, that they “planted, picked, shelled and washed.”

They still garden, and she says her daddy’s place (the late R.C. Ledbetter) is the best garden spot. He planted a lot of corn and always had a row of sunflowers, and they still plant sunflowers on the front row.
Butterscotch Pie was a  favorite of her mother, and Donald  likes egg custard, which was his mother’s recipe. She got the squash dressing recipe from the late Willie B. Peden.

When she gave the biscuit pudding recipe, she said the first biscuits she made they couldn’t eat, but they tried. The sugared pecans are her Aunt Idell’s recipe, and in mentioning pecans, said granddaughter Anna Taylor Camp likes her pecan pie.

And in their family, Red Velvet Cake is son, Ken’s favorite, and wife, Ginger, says the homemade rolls.
The Camps try to have a gathering for Easter, Mother’s and Father’s Day, as well as Thanksgiving and Christmas. If they have had a traditional Thanksgiving meal, they will usually do something a little lighter for Christmas, like finger foods, along with Dirty Santa.

Mrs. Phyllis says granddaughter, Kasey, 13, is showing some interest in cooking, and when she comes to her house, she likes to make cookies, especially chocolate chip, also cornflake candy, and Rice Krispie treats.