By Joel McNeecePublished On: September 4, 2013

Ouida Moore, of Calhoun City, believes almost every recipe can be tweaked for taste and convenience, so even the pass-along recipes she uses are uniquely hers.

Moore, an RN at Calhoun Health Services in Calhoun City, said she frequently cooks for her co-workers at the hospital, but not as much as she did when she was a ward clerk there. Moore works 12 hour night shifts now, but still cooks birthday meals for co-workers.
“Before I was an RN, I would cook a full meal for every shift at Christmas,” she said. “Now when I cook, it’s just for my shift. But when the next shift comes in, they are usually looking for any leftovers.” 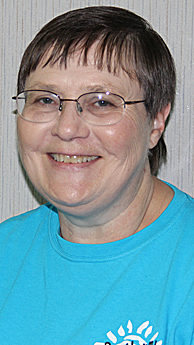 Moore learned to cook when she got married, although she made earlier attempts at her mother’s direction.
“Mother would be in the garden, and I was supposed to be cooking supper. But I would get caught up in a book I was reading, and supper would burn.”
She cooked fried chicken for her husband Larry when they first married.
“It was so pretty, a beautiful golden brown” she said. “But when he cut into it, it was bloody raw. I just didn’t cook it long enough.”

But Moore’s cooking skills have developed over the years. She said now she cooks simpler meals during the week for her and Larry and more on the weekend for her son and his wife and their three children.
She said her grandchildren are big fans of her cooking with one telling her she was “better than Throwdown,” referring to Food Network star Bobby Flay.
Moore said despite the early chicken disaster, she cooks a lot of chicken now, using it in Taco Soup. She always pairs her soups with broccoli or Mexican cornbread.

She said her Pasta Salad, which is solely her own, is probably her most requested recipe, but most of her co-workers have her Tomato Cup recipe.
Moore said she cups a lot of recipes out of newspapers and collects cook books, picking them up at yard sales. But she always tweaks the recipes, unless they are baked goods.
She says pecan pie is her favorite and that’s the only pie she takes the time to make a home-made crust for. The Peanut Butter Ice Cream is a Paula Deen recipe that she adapted to make it easier and “revved it up” with the Butterfingers and Cool Whip.
Moore said her Pasta Salad can easily be adapted to individual taste by adding other vegetables.

Peanut Butter Ice Cream
2 quarts half and half
1 cup peanut butter (crunchy if you like nuts)
1-1/2 cup sugar
1 tsp. vanilla flavoring
1 pk. Butterfinger candy bars, crushed
8 oz. Cool Whip (optional)
Mix peanut butter and sugar together before adding half and half. Mix other ingredients, pour into ice cream freezer and freeze according to manufacturer’s directions.