“Teachers and coaches are the biggest thieves because they always take each other’s ideas–it’s the same thing with cooking!” said Jordan Graham, who says he likes to try and recreate things he eats or sees somewhere.

When he cooks, he usually does his own thing, with no recipes, and “presentation is half the meal,” he says, “if it looks good, it usually tastes good.”
Graham, a Bruce assistant football coach, powerlifting coach, and history teacher, is married to Bruce native Christina Poynor and they live in Pontotoc. He says he has always been around food and basically learned to cook at Ruben’s in Columbus, where he worked during high school. That is where he began using Cavendar’s seasonings, which he continues to use. And while in college he worked at Lenny’s Sub Shop. 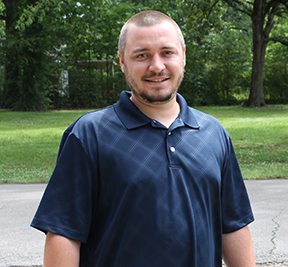 He says he cooks a lot, “at least half the meals,” and he usually grills. He grills deer tenderloin wrapped in bacon, a recipe he got from Coach James Ray. And he also likes to grill chicken wings, catfish, salmon, tuna, bacon wrapped chicken and steaks. He said he is expected to cook in the summer, and about grilling, he says the guys, “try not to let their wives know how much they enjoy it.”

He cooks a big breakfast every weekend with biscuits and gravy (which he is still trying to master), or waffles–blueberry or chocolate. He likes to have hash browns with onions and bell peppers, so he is big on having fresh vegetables. He says Christina cooks fresh peas, butterbeans, cornbread, chow chow, fried tenderloin, and it’s all good.

Jordan likes to make appetizers and everybody likes the meatballs, he said. “They are good for potluck dinners or entertaining guests like for football games.” He pretty much made up the grilled chicken and stuffed mushroom recipes, and Christina’s favorite is the mushrooms. “Whatever is served with the mushrooms, they are the best thing on the plate!” he said.