Jessica Sullivan Barefield said her family and friends will “spit their coffee out” when they see her as Cook Of The Week, because she doesn’t cook that much. She does like to, but says that things don’t taste like everyone else’s when she makes them.

“I surround myself with good cooks,” she said, “so I don’t have to do much of it!” she laughed. She went on to say that she and husband, Jason, and daughter, Lucy, eat at her mother’s on Sunday, his mother’s on Thursday, and usually at their friends’, Troy and Alecia Todd’s on Saturday, for which she sometimes takes a dessert or the sweet tea. 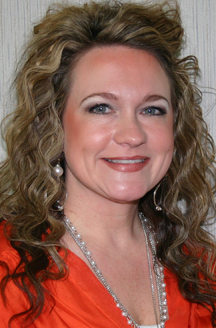 But she does cook on Monday–most times peas, creamed potatoes and cornbread, “so they will have some leftovers.” She has been making cornbread and cooking vegetables since she was little. She or sister, Lacy, had to help in the milk barn when they were growing up, and she always chose the cooking and housework to stay out of the barn.

Even though she spent more time in the kitchen, she says, “Lacy got the cooking!” They spent a lot of time watching their grandmother, Leona Sullivan, making biscuits. And she could make an “awesome pineapple cake” that Jessica wishes she had the recipe for, and that she had taken notes from her about cooking.

Strawberry pie is her favorite of Jason’s grandmother, Lucille Morris’ recipes, and she makes that one a lot. Jessica’s all-time favorite dessert is German Chocolate cake, which she has made before. She also loves grilled crappie, something they have pretty often at the Todds’. Her favorite appetizer to take somewhere is the corn dip, which she likes to serve with Scoops chips, but some prefer Fritos. She and Lucy eat the baked cauliflower “like candy”, but says the kale chips are good, too.

Jessica began juicing and making smoothies on and off about a year ago after hearing Kerry Heinz talking about juicing. Then, when she found out she needed to watch her cholesterol, she got more serious about it.

She likes to make the cholesterol buster cocktail in the morning for breakfast because “it gives you lots of energy!”

Kale Chips and Cauliflower
Wash and dry kale leaves and cauliflower. Toss with olive oil and sea salt and place in oven on baking sheet at 350° for about 15 minutes.