M.D. Jennings feels at home in his new role leading Calhoun City football.
Jennings, a product of Calhoun City High School, spent his college days at Arkansas State before an NFL career that ran from 2011-2015. After the City head coaching job came open in the spring, Jennings, who was the Wildcats’ offensive coordinator, earned the promotion to the head job.
“It’s a great feeling to be back home having a chance to take over the program,” Jennings said. “There’s a lot of pride and tradition with Calhoun City football, so we just want to try to continue to stack success.”
After playing at the highest level football can offer, Jennings is hoping to implement some things that he learned at the college and professional levels.
“I’ve been around a bunch of great coaches, so I do try to implement some things: strength and conditioning and scheming,” Jennings said. “I would like to implement some of the things I’ve learned throughout the years.” 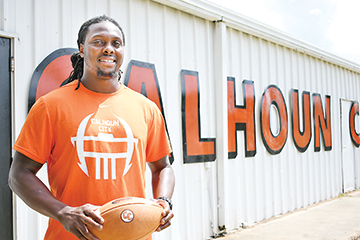 When Chad White left the Calhoun City head coaching job for a coordinator position at Ripley in the spring, the focus for CCHS principal Mike Ray became finding the right fit for the program, regardless of whether or not it was an outside or inside hire.
“Once the job came open, we were all surprised,” Jennings said, “but we were able to put the job out there, and he wanted to make sure he was making the right decision for the program. When the job was offered to me, he gave me some time to think about it. After praying about it, I decided that that’s what I wanted to do.”
As far as putting his mark on the program, Jennings wants to have an impact on his players beyond the football field.
“You always want to win,” Jennings said. “As coaches, you’ll always be judged by the win and loss column, but overall, at the end of your coaching career, you want to make sure you were able to grow these young men into some great husbands and future leaders. I want to make sure I’m putting these guys on the right path to be successful with life after football.”

Although he served as offensive coordinator last season, Jennings is moving back to his natural position of handling the defensive side of the ball. Travis England will be handling the offensive play calling.
“I’m a defensive guy, so I feel like I’m going back to my comfort zone,” Jennings said. “In high school, I fell in love with the defensive back position, and then continued to play in the defensive backfield in college and the NFL.”
Jennings has taken over the reins of the Wildcat program in the midst of the global COVID-19 pandemic, something that has presented challenges in his transition.
“It’s been an awkward year dealing with all the COVID-19 issues,” Jennings said. “Dealing with that and having to tweak the way we work out has been different. I tell our guys that we’re just going to control the things we can control and get better whichever way is possible for us.”

As far as plans for the fall go, Jennings is hoping the kids, especially his seniors, get to have a normal year.
“We really owe it to the kids to make it as normal as possible,” Jennings said. “At the end of the day, the seniors, this is their last ride.”