By Joel McNeecePublished On: September 17, 2014

Emma Jean Tramel Taylor of Water Valley and formerly of Bruce, uses a pie recipe that you can make chocolate, coconut, or half and half.

It is “totally my recipe that I dreamed up,” saying she uses a chess square topping of a mixture of cream cheese and confectioners sugar, rather than meringue, because her family doesn’t like meringue.
“I did pretty good with boxed spaghetti when we first married,” she said, but her first biscuits, “the dog wouldn’t eat,” said husband, Billy. Now when the kids come home, breakfast consists of biscuits, chocolate gravy, tomato gravy, eggs, bacon, sausage and fried hot dogs. She said her mother, the late Burnie Tramel, always fixed a big breakfast every Sunday morning. She and Billy like biscuits and peach preserves as one of their favorite breakfasts, and sometimes, she says she pulls an IHOP, and adds Cool Whip. 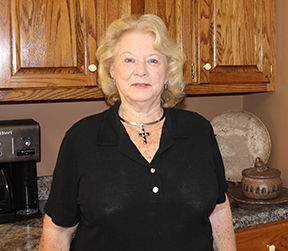 Emma is the family’s slaw-maker and recently prepared enough for 75 people attending a  fish fry at the lake. She says she makes it  “assembly line style” and that it’s a favorite of a lot of people. She doesn’t recall where her baked okra recipe came from, but “there is nothing like it–it’s just like eating popcorn!” The cheese ball recipe came from Roland Smith of Bruce who once brought it to a Christmas gathering at Oxford Hospital, where they both used to work.
When she was 11 years old, she worked for Homa and Ruth Bailey at their grocery store in Bruce, saying she worked there to keep from picking cotton.  She would take home a can of Mexicorn, brown-and-serve rolls and fried taters for her supper sometimes.

The Taylors have two children, three grandchildren and one great grandchild, and have enjoyed camping, fishing and traveling.  Her family loves poppy seed chicken, chicken tetrazzini, Mexican cornbread, twice baked potato casserole, sausage breakfast casserole, banana split cake, taco soup and Elephant ear crackers.
She says she doesn’t make candy or cookies much, and likes to bake Italian Cream Cakes at Christmas, recalling that she made it once and realized after it was all iced she hadn’t added the sugar, so she had to throw it out.

Chocolate Pie/Coconut Pie
1 stick butter
1 cup evaporated milk
3/4 cup sugar
2 Tbsp. flour
3 egg yolks
Mix all ingredients. Cook on low heat until thickened. Stir. Divide mixture into half. Mix one cup coconut in one mixture, two Tbsp. cocoa in the other mixture. Pour into baked deep pie shell, side by side. Then add the mixture of 1-8 oz. cream cheese, 1 box confectioners sugar and three eggs. Beat together. Pour over mixture in pie shell. Bake 35 minutes on 350°.