“We enjoy eating around our house,” said Don Hardin of New Liberty community, who also commented that he likes a variety of food. Even though he has always known how to cook, “whoever got home first would start supper,” he said.

But since the retirement of him and wife, Mitzi, they’ve been, “cooking less, and eating out more!”

They cook for Sunday family lunches as they alternate between the Hardins and the Baileys, and while they fix different dishes each week, squash casserole is something he frequently makes. 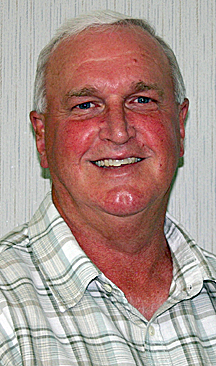 His mother, Essie Hardin, and grandmother, Myrtle “Mama” Hardin cooked what he calls the “essentials”–vegetables and dessert. Mama Hardin taught her daughters and daughters-in-law to cook, and “it’s hard to live up to Mama’s and the Hardins’ cooking!” he says.

Don thinks his chess pie does taste like Mama Hardin’s and the ones at the bakery at MS State. Last year was his first time to make chicken and dumplings and they were “close to Mother’s and Mama Hardin’s.”

He hasn’t attempted  their apricot nectar cake, or rice pudding (that he doesn’t have her recipe for), but might. Another thing he’d like to try is a biscuit pudding his mother used to make.

He described it as similar to bread pudding, using leftover biscuits, sugar, butter, and vanilla.

Don, who hardly ever sticks to a recipe, uses the internet for a lot of recipes. The salsa chicken recipe is one he made up, and he tweaked several shrimp and grits recipes to get the one they liked for themselves.

He cooks breakfast often, and biscuits, gravy and tomato is their favorite. He says Mitzi critiques his cooking, but eats it anyway.

“If she says ‘it was alright’ he takes it off the list.” She does likes his shrimp and grits, and the chess pie.

Salsa Chicken
Five or Six boneless chicken breasts
Olive Oil
Tony’s creole seasoning
2 medium onions
2 medium bell peppers
1-10 oz. jar of mushrooms
Salt and pepper
1-16 oz. jar of chucky salsa
1 package of mozzarella cheese
Brush olive oil onto each chicken breast and place chicken in baking dish. Season chicken breast with Tony’s creole seasoning. Slice peppers and onions and place on top of chicken. Season peppers and onions with salt and pepper. Place layer of mushrooms on top of peppers and onions. Pour a layer of salsa evenly over the top of  peppers, onions, and mushrooms. Cover baking dish and cook for 40 minutes. Remove from oven and place a layer of mozzarella cheese on top of the salsa. Place back in oven until cheese melts.

Shrimp and Grits
2 lbs. medium shrimp, peeled, halved lengthwise (if you use small shrimp do not half)
Juice of one lemon
Hot Sauce or Tony’s creole seasoning
Tablespoon of parsley
1 1/2 teaspoons salt or more to taste
2 cups stone-ground grits, not instant or quick-cooking
6 thick slices bacon, chopped
1 bunch of green onions diced
1/4 cup finely chopped green bell pepper
1 garlic clove, minced
1/4 cup  tablespoons  flour
2 cup chicken stock
4 tablespoons butter
4 tablespoons of olive oil
1 cup (about 1/4 pound) grated medium to sharp Cheddar cheese (I use the whole bar)
Combine shrimp with the lemon juice and a couple of generous splashes of hot pepper sauce or Tony’s creole seasoning. Set aside.
Grits: In large heavy saucepan or Dutch oven, bring 6 cups of water and 1 teaspoon of the salt to a boil. Whisk in the grits a few handfuls at a time. (They will bubble up initially.) Reduce heat to a very low simmer and cook over low heat for the time recommended on the box (I cooked mine about 5 minutes more than the recommendation), stirring occasionally at first and more frequently toward the end.
Gravy: While grits are simmering, fry bacon in a medium skillet over medium heat until brown. In a large pan put in butter and olive oil. Stir in onion, green pepper, parsley, and garlic and cook until  onion and pepper are well sautéd, about 5 minutes. Sprinkle flour over the mixture, and continue sautéing 5 minutes longer. Stir in stock and remaining salt and cook for 5 minutes longer. Remove from the heat while you finish the grits When the grits are thick and creamy, stir in as much butter as you wish, followed by the cheese. Add a splash of hot pepper sauce (I use Tony’s creole seasoning instead to taste) and additional salt if you like. Cover the grits while you finish the gravy. Return gravy to medium heat and stir in the shrimp. Cook until shrimp are opaque throughout, about 5 minutes. Serve immediately, place grits in large shallow bowls or on plates and covering them with the shrimp and gravy.

Baked Potato Soup
1 onion, diced
3 Tbsp. olive oil
½ cup all purpose flour
3 (14.5 oz. cans chicken broth
5 potatoes, baked, peeled and diced
2 cups half & half
1 cup sharp cheddar cheese, grated
1 cup sour cream
Salt & pepper to taste
Garnishes
Sliced bacon, cooked and crumbled
Chives
Sour cream
Shredded cheddar cheese
Place three tablespoons of olive oil and onions in Dutch oven. Cook onions over medium heat until tender. Once tender stir in flour and cook for one minute, stirring constantly. Gradually add chicken broth; cook, stirring constantly until thickened and bubbly. Put in diced potatoes and half & half. If you like your soup very chunky you can leave it as is. If you like a slightly smoother soup you can use an immersion blender to blend it. Continue to cook on medium-low heat for 10 minutes and stir in the cheese and sour cream. Garnish with the bacon, chives, additional cheese, and sour cream.