Courtney Griffin of Bruce says for next weekend’s Egg Bowl, her Mississippi State family members will join them in the Grove for tailgating. “It will be interesting,” she said. Besides the Mississippi State cake her family says they are bringing, the menu will consist of a mixture of finger foods, kind of like they serve when the family gets together for Christmas.

Courtney’s favorite tailgate dishes are Chicken Roll, Jalapeno Popper Dip and Cuban Sliders. Her dad makes the meatballs, which she says are a great appetizer.
Courtney and sister, Erica, made cookies and cakes in high school, but she didn’t do much other cooking until about 19, when she was out on her own. She picked up some things about cooking from her parents, and from a best friend, Linkie Marais, also formerly of Saltillo. Linkie, who appeared on the Next Food Network Star last year  now lives in Boston, but is originally from South Africa.  Courtney says she calls her from time to time for a cooking tip or suggestion, and she usually gives her a unique idea to try.  Linkie worked for a cake decorator, and after culinary school as a pastry chef. She is now a spokesperson for Green Egg. 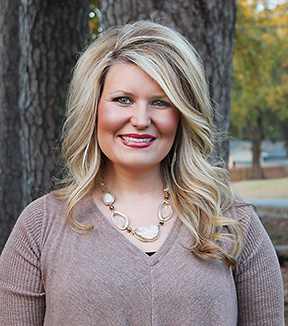 Erica says Courtney can look in the pantry and pull out three things and put a dish together. Courtney says she got this “Pile of Surprise” ability from her dad, who used to do the same thing. She is not a measuring cook, and says she goes by taste. A couple of her “Pile of Surprise”  dishes might be pizza casserole or homemade vegetable soup to which she adds noodles and extra meat.
She loves anything “cheesy and fattening,” she said. Some family favorites she makes are lasagna, homemade macaroni and cheese (which changes each time she makes it) and shrimp alfredo.

Courtney, Erica and their mother, Nancy Warren, participated in a cooking class “The Help” at the Viking Cooking School in Greenwood. They prepared Southern food–fried chicken, greens, biscuits and chocolate pie. She says she hasn’t mastered frying chicken and would like to get better at that.

She likes to have treats for the kids after school and likes  for the house to smell like cookies or muffins. One of their favorite cookies is oatmeal chocolate chip.  Husband Jared and their daughter Brooklyn are the chocolate eaters of the family, and Courtney and their daughter Rivers like plain vanilla ice cream. The kids like the Pina Colada cake, and she says the pistachio cranberry cookies are green and red and soft and delicious, “perfect for the holidays or anytime.”

Aunt M’s Famous Apple Dumplins
1 Granny Smith apple
cut into small cubes
1 can of crescent rolls
1 stick of butter
1 cup of apple juice
1 cup sugar
Cinnamon
Place unfolded crescent rolls in greased baking dish. Add cubed apple into each roll and  roll up. In saucepan, melt butter.  Add sugar and apple juice together. Bring to boil and remove from heat. Pour over crescent rolls and sprinkle with cinnamon. Bake at 350° until golden brown (about 30-40 minutes). Serve hot with vanilla ice cream or by themselves. Makes eight.