Arlene Castleberry of Banner started teaching grandsons, Lucas and Rudy Ferguson, how to cook some of their favorite foods after she had a stroke in 2008. “She coaches, while we cook,” was how they described it.

The first thing for Lucas was Thanksgiving dinner and he and Mrs. Arlene agreed it was “interesting.”
“We had to mop chicken broth off the floor,” said Lucas. 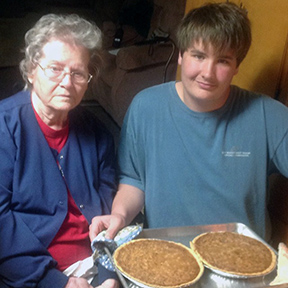 “He burned the pie crust, but the filling was right,” she said, “and the meringue didn’t make,” added Lucas. About that Thanksgiving meal, she laughed and said there were a “few mess ups or clean ups,” but the dinner was good. He also learned to make chicken and dumplings from her and she says his taste good.

Rudy recently learned to make her pecan pies on a bet. While hitting plastic golf balls into the kitchen sink from the living room, one of Mrs. Castleberry’s sitters made a bet that if he made the next one, she would make him a pecan pie, which is his favorite. But, if he missed, he would have to make her one. He missed. So he got his grandmother to instruct him on how to make them. She and Sherry said they were good.

Mrs. Arlene has cooked her whole life, beginning at age eight with vegetables and cornbread, as she was the oldest of nine brothers and sisters. In their  basement is an old wood stove from 1952, the Castleberrys got two years after they married. Still in working condition, it was last used to cook on during an ice storm.
She worked 15 years as kitchen manager for the University’s Medical School Hospital in Ann Arbor, Mi. She also planned menus and catered events that were held there, and recalled one for their first heart transplant patient, that she made shrimp cocktail as an appetizer.

She told of making Christmas ribbon salad with red and green Jello for years, but more recently they have changed to pistachio. For their Christmas meal, they are having a spaghetti dinner with pistachio salad and Tex Mex (layered Mexican dip). The dip is a favorite of Sherry’s they have always included at Christmas. Lucas also plans to make one of his favorites, butter roll, for the first time for Christmas, with his grandmother’s instructions, of course.
Mrs. Arlene learned to make chicken and dressing (and everything else) from her mother, Ercell Mulkey, who didn’t measure when making it, so she doesn’t either. She said her mother also made a lot of buttermilk pies because those ingredients were always on hand.

She likes steak, and daughter Sherry says they love to grill steaks often. Another favorite of Sherry’s is her mom’s Million Dollar pie.